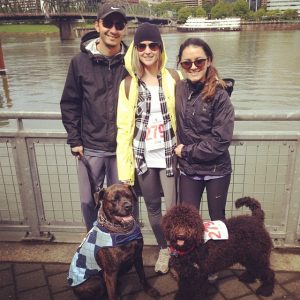 Today, our staff was able to participate in the Oregon Humane Society’s annual Doggie Dash! Portland’s Doggie Dash is the largest organized pet walk on the west coast. This year alone, the OHS Dash has raised almost $500,000 to help support it’s many programs, from finding homes to animals in WA and OR, to providing necessary emergency medical services for pets and investigating animal cruelty cases!

In honor of this amazing fundraiser to help support Oregon’s pets, we thought we would share a cool dog fact with you:

TRUE OR FALSE: Dogs only see in black and white.

Contrary to what you may have heard, this statement is actually false! Dogs may have significantly more limited color vision than their human counterparts, but dogs do see color.

As humans, we see color because of our three types of color receptors, each one responsible for detecting either red, green, or blue light. Some people (primarily men) have colorblindness, which makes it difficult to distinguish between certain colors. For instance, humans with red-green colorblindness have difficulties seeing the differences between red and green.

Dogs see the world in a way that’s very similar to humans with red-green colorblindness. So to your dog, it may be tough to distinguish between reds and greens, making the world a just a little grayer.

While dogs do have some limitations to their vision in their ability to perceive color and brightness, they do have much better motion detection than us. This may be part of what makes them such great watchdogs- that and their amazing hearing and smelling abilities!

Font Resize
Contrast
Accessibility by WAH
Call Us Text Us